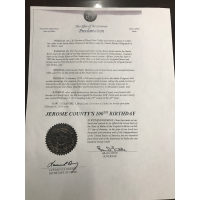 The Office of the Governor
Proclamation

Whereas, Mr. I.B. Perrine of Wood River Valley was shown a place to winter his cattle in the Snake River Canyon at the Blue Lakes by Charles Shirley Walgamott in the 1880's; and

WHEREAS, Mr. Perrine envisioned water on the desert plains above the Snake River and with the help of wealthy financiers from the Eastern United States, create a dam on the Snake River at The Cedars and created a town - Milner; from this dam in 1905 the desert on the SOuthside of the river now had water for irrigated farms and homes and in 1910 the desert on the north side had water in canals for irrigated farms and homes; and

WHEREAS, Greenwood, Eden, Hazelton and Jerome towns were created between 1905 and 1911 on the north side of the Snake River and;